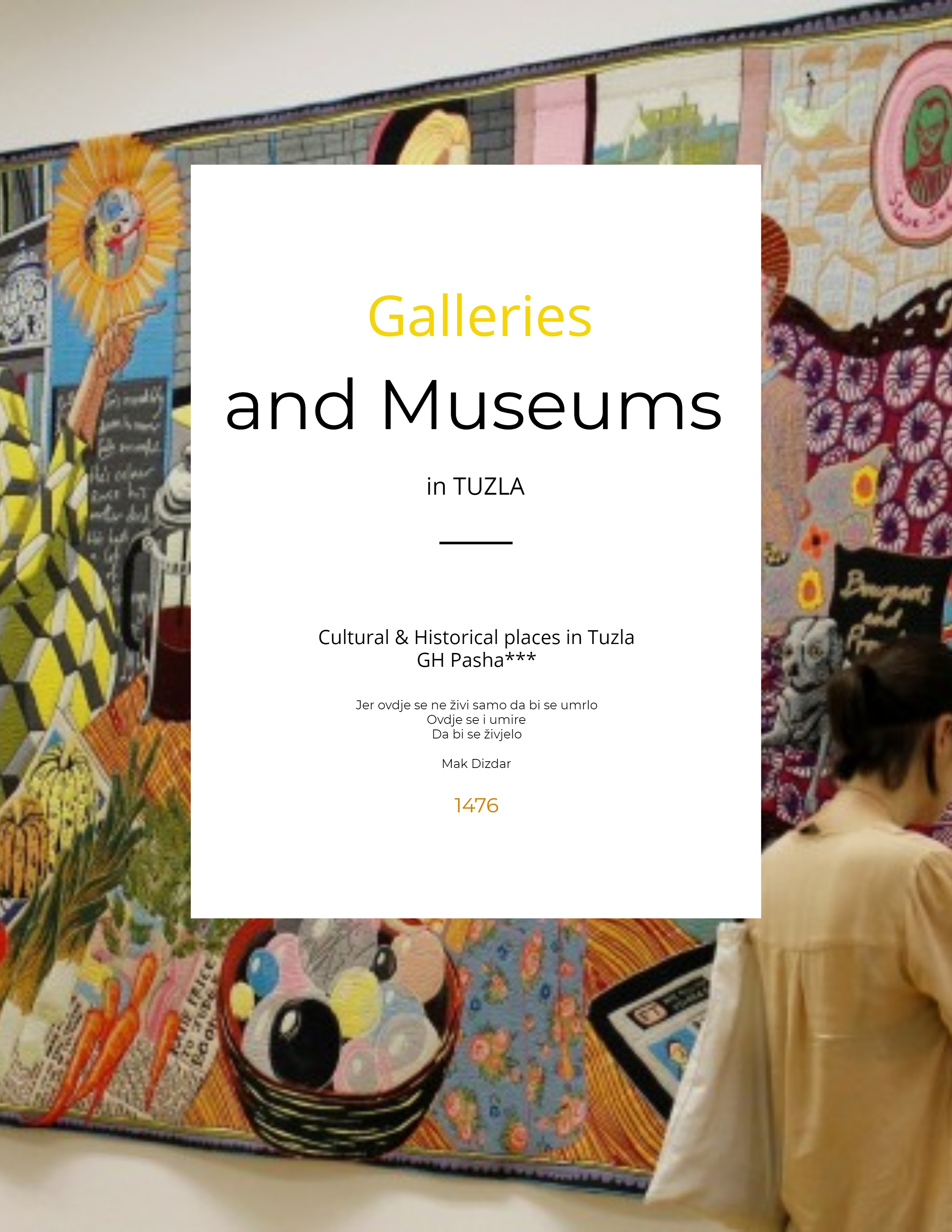 The Museum of Eastern Bosnia in Tuzla  exists since the Second World War (1947) when there was a need to mark the period of the National Liberation War. With the appeareance of the need for  other sections,within the museum opened the following;

Although the museum does not currently have a building that will adequately present the treasure of the "Regional Museum" as it was called during its existence, it is still worth visiting for the things that are in it.

The production of salt in Tuzla continues from neolithic to the present time. Archaeological material, fragments of ceramic vessels, found in the city of Tuzla around today's Colorful mosque and scaffold, testify to the existence of Neolithic settlement. There is no material evidence from the Roman era, however, the meaning of the name of this city is related to the note by Constantine Porphyrogenitus, who in the De administrando imperio refers to Tuzla as a "populated city" and calls it Salenes.

The evidence of the existence of salt wells from the Ottoman period is now visible through the Salt Well located on Salt Square (Solni Trg) in Tuzla. During the Ottoman period factory of salt (Solana) was a simple structure made of wood with a one-room space of approx. 4.5 x 4.5 m in total. In this time Tuzla Old Town was in the same time factory and centre of Tuzla and during this simple production there were a lot of city fires in which historical buildings from this period were burnt and egsist no more. 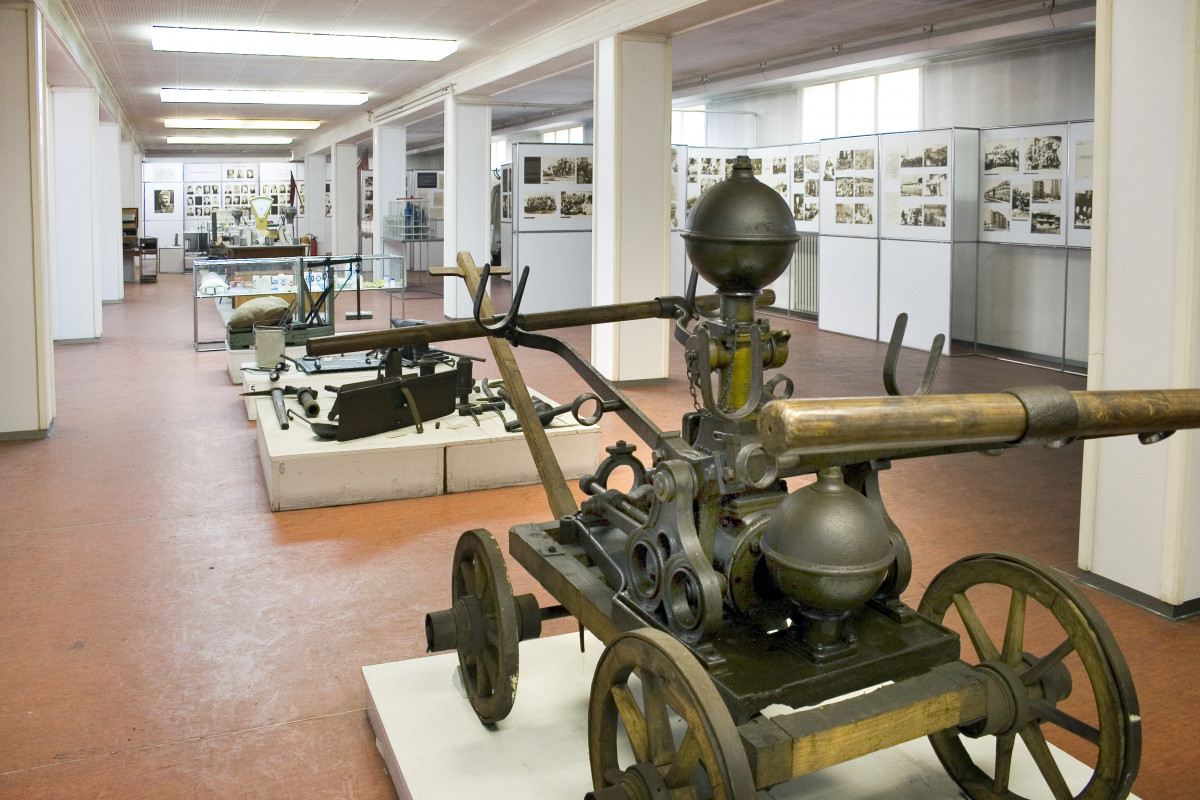 During the Austro-Hungarian rule, a factory was opened in Simin Han with two salt wells in Upper Tuzla. Solana was commissioned on March 25, 1885. In the first year of operation, about 1858 tons of salt were produced.

On the eve of the Second World War, Tuzla saltpans with plants in Simin Han and Kreka had a total of 13 production boxes with an expansion plan and increase in production capacities. After the end of the Second World War, Solana continued to work in an attempt to restore the destroyed production capacities. At the beginning of the fifties, the construction of new pans for the salting of salt water began. In 1952 three new production facilities were built and put into operation.

You can see the decision to proclaim salt production in Tuzla as a national monument here.

The International Portraits Gallery of Tuzla was founded in 1964 with the donation of artists from the territory of the former Yugoslavia. The founders of the Gallery were Mevludin Ekmečić and Ismet Mujezinović, and it was founded as a gallery of the Yugoslav portrait of Tuzla. The Gallery has over 5,000 works of the most famous painters from the ex-Yugoslavian area, and thus represents a kind of museum of paintings. 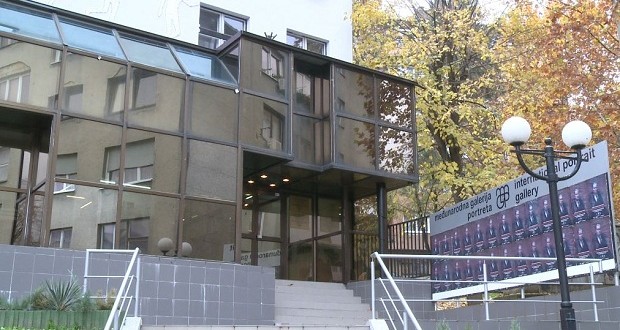 The Ismet Mujezinović's studio is a birthplace and workshop of this famous artist and painter who has contributed a lot to the development of cultural, artistic and creative life of Tuzla, Bosnia and Herzegovina and the Balkans. 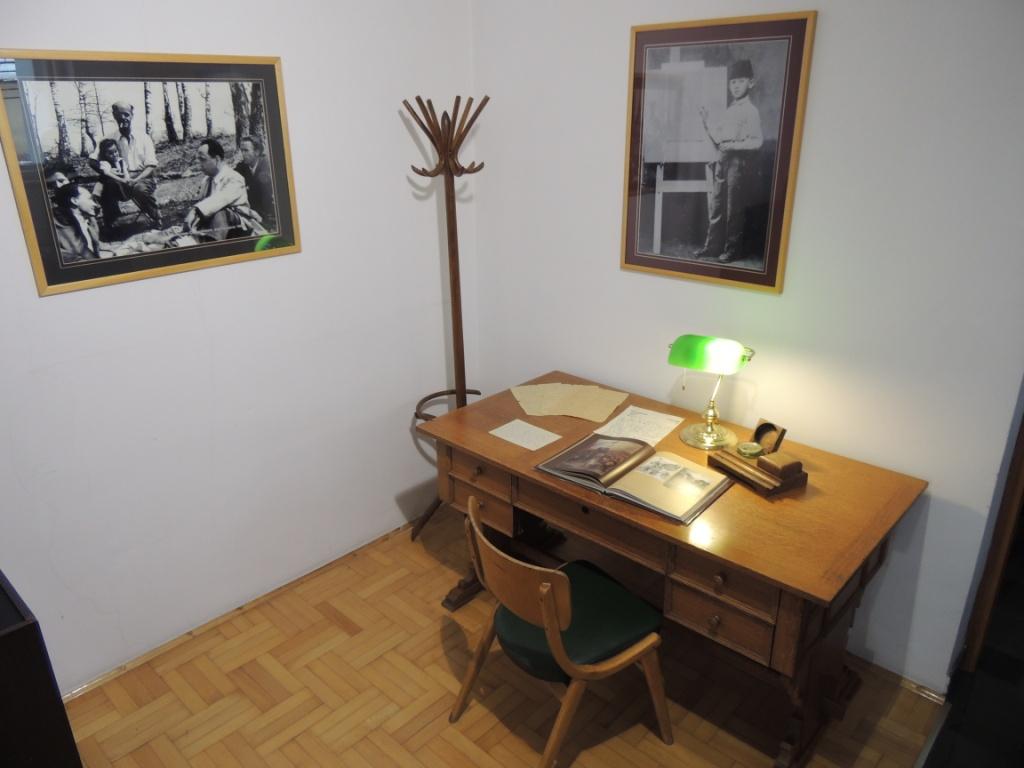 The studio is located in the city center and represents a place where  artists from all over Europe and the world come to the invitation and in the six months of their stay, create works and real exhibitions of works made during their stay in Tuzla. There are also concerts, exhibitions and book promotions that enrich the cultural life of Tuzla.

Kristijan Kreković Gallery was named after a renowned artist from Bosnia (1901), and was opened in the Franciscan Monastery of St. Peter and Paul in Tuzla. Although he originated from Lika, he spent his childhood in Maglaj and Tuzla. He studied in Vienna and Paris, and in 1928 he became a member of the French Society of Artists. In the same year, he was awarded a golden medal in Bordeaux for the work "Parisian Lady with a Dog". He worked portraits of famous statesmen and people, but it is important for us to mention the name Mahatma Gandhi who was his friend. 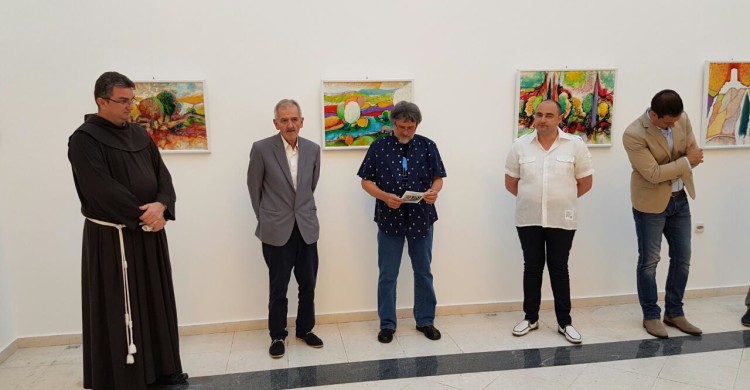 Today at the gallery there are exhibitions from art colonies in Breske, which are gathered by famous and unknown painters and sculptors from BiH and wider. In addition to the exhibition, there are also dramatic and scenic performances and book promotions.

Gallery GM is the first private collection of Enver Mandzic with thousands of miniatures of over 300 artists from all over the world, the largest collection of weights, irons, typewriters, film cameras and cameras, and a library of fine arts.

In addition to the collection, at the GM Gallery you will have the opportunity to see the current settings of painters, miniatures and artwork, but you will be able to drink coffee in a cafe that is part of the gallery and enjoy the sculptures of Radoslav Tadic located around the gallery. 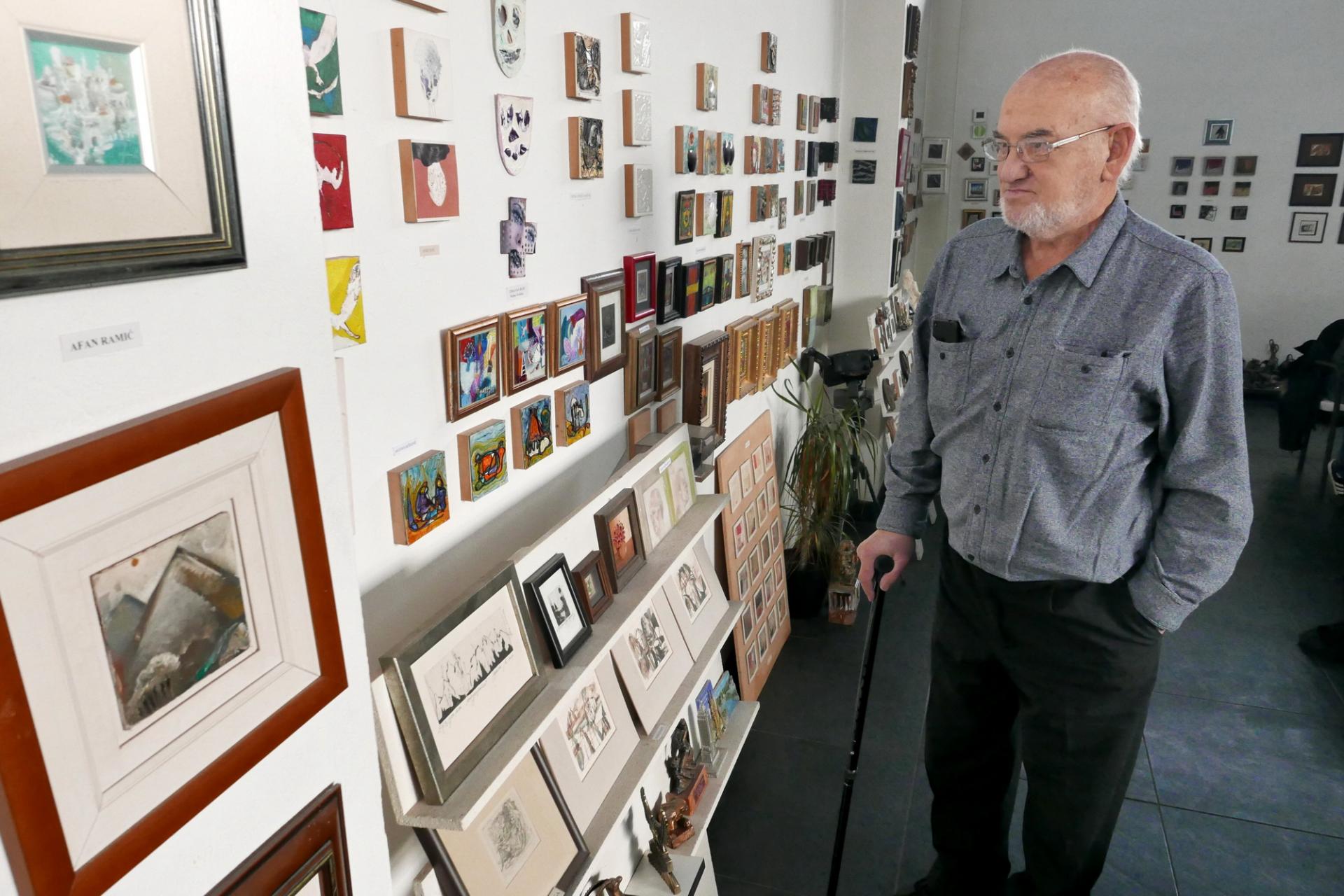 Although it is the youngest gallery in Tuzla,there is an interesting fact about the gallery; It was opened on November 11th 2011 at exactly 11:11 o'clock, as a protest against the relation of Bosnian governement towards culture and art in general.

The NERMINA gobelins gallery represents a combination of tradition, beauty, and luxuries. The gallery is open with the aim of enriching the cultural and artistic life of Tuzla, where its premises are always alive, as there are promotions of books, exhibitions, charity actions and fashion shows.

If you visit Tuzla, visit this gallery as well, as you will have an opportunity to get acquainted with the values of manual work and art of Jakob Viler (Berlin 1893) who has been working on modern ways of doing business, and that is why you could order the embroidery motifs on the gobelins. With the catalog, people bought and ordered not only from Germany but also from our area. 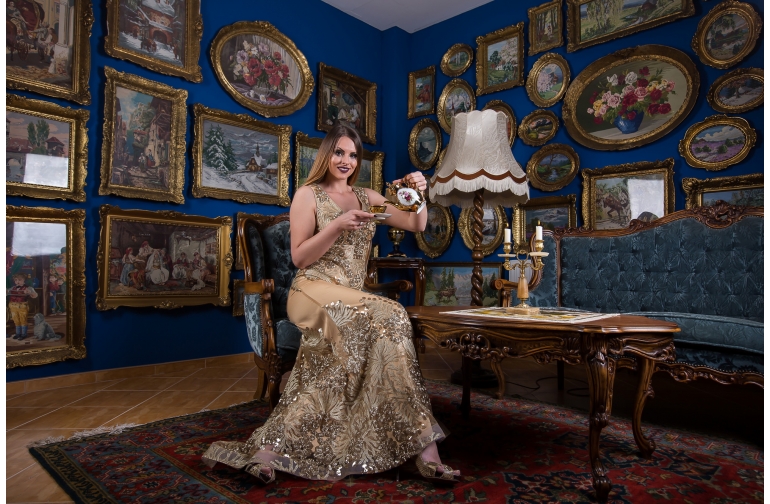 The gallery is just like the Viler in its domain, a very proactive gallery and not only visitors can see the gobelins but also through the web site to get acquainted with the stories that hide behind the gobelins.

Gallery MI RITMO deals with the sale of artwork  based in Tuzla . Whether their creators from Tuzla or they were born in Tuzla, however, it is a rich offer of paintings and miniatures made in traditional and modern style of painting.

In addition to the sale and "service" of the art, somehow boyish shamelessness and defiance, surprise everyone who follows the work of the gallery. The Mi RITMO Gallery since 2004 organizes the "MODRAC Artistic Colony", enriching the cultural and artistic life of Tuzla. 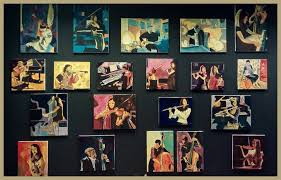 Since its inception (1996), the gallery has been running a nomadic way of life, changing the location of Tuzla, where it eventually settled in one place TC OMEGA (last floor).

The COFI Gallery is a gallery for the exclusive sale of artist Avdo Kalesić's paintings showing his love for his city Tuzla. Old buildings, old motives and neighbourhoods(Mahale) which are no longer present, Avdo Kalesić managed to save on the canvas. 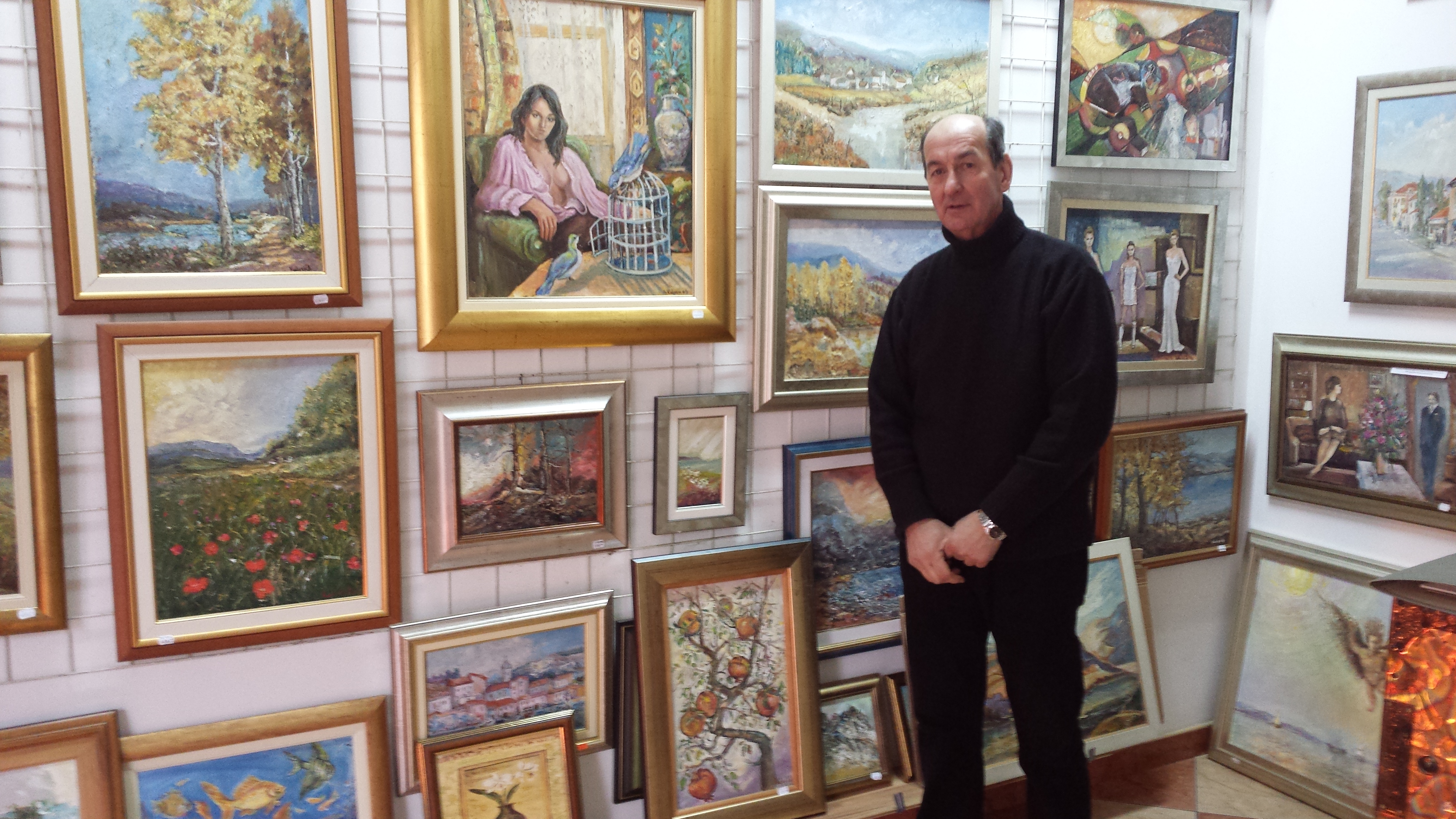 Considering that it is located in the center of the city, the gallery exudes old Tuzla and the motives of old Tuzla.